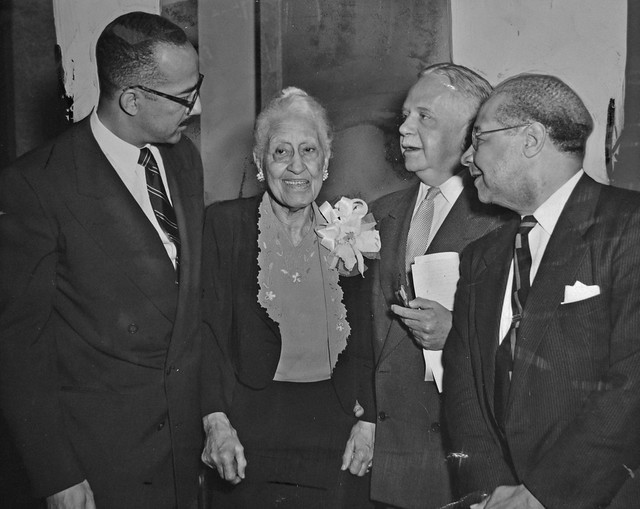 On Friday, January 27, 1950, Mary Church Terrell met three friends for a late lunch in downtown Washington. Terrell, then 86, entered Thompson’s Restaurant on 7th Street NW around 2:45pm with Rev. William H. Jernigan, Geneva Brown and David Scull. Their party was integrated – Scull was white while the others were black – however, Thompson’s Restaurant was not. Like most other D.C. eating establishments at the time, it was whites only.

As the group went about selecting entrees along the cafeteria line, Manager Levin Ange emerged and informed them that Thompson’s did not serve “colored” people. Terrell clarified,

“Do you mean to tell me that you are not going to serve me?”

When Ange confirmed that was the case, the group left the restaurant.[1]

The chain of events was, of course, entirely expected. As a leader of Washington’s civil rights movement for half a century, Mary Church Terrell was well aware of Thompson’s policy. But she and the others didn’t go to the restaurant to be served. Rather they went with the expectation of being turned away – the necessary, if also demeaning, first step toward bringing a new sort of legal challenge, which they hoped would topple segregation in the nation’s capital.

But really, “new” is the wrong word to use. The legal action that Terrell and company had in mind was based on two rather old laws passed by D.C.’s legislative assembly during Reconstruction, some 75 years before.

In 1867 – three years before the states ratified the 15th amendment, which granted African American men the right to vote nationwide – Congress made universal male suffrage the law of the land in the District. Over the next few years, newly enfranchised blacks helped elect progressive white Republicans to the city council and, eventually gained a few seats for themselves. In 1872 District lawmakers passed an ordinance barring discrimination in places of entertainment, restaurants, bars and hotels and fined proprietors for violations. Another ordinance passed in 1873 stipulated that facilities had to be open for “any respectable, well-behaved person without regard to race, color or previous condition of servitude.”[2]

As encouraging as these steps were, the window of racial progressivism closed quickly. Within a few years, the political pendulum swung back in favor of conservative Democrats, who aimed to restore the political and social dominance of white men. President Grant and Congress changed the District’s system of government, D.C. lost home rule, and the equality ordinances stopped being enforced.[3] Jim Crow took hold in Washington, and the brief period of integration was all but forgotten, particularly after President Wilson effectively segregated the federal government prior to World War I.

The so-called “lost laws” didn’t resurface again until 1948 when the Truman administration released a scathing report entitled Segregation in Washington, which was assembled by a committee of 100 national figures including Eleanor Roosevelt and Helen Hayes. It read, in part:

Some people say that the time is not ripe for colored people to have equal rights as citizens in the Nation’s Capital and that white people are ‘not ready’ to give them such rights. But in 1872...the popularly elected Assembly of the District passed a law giving Negroes equal rights in restaurants, hotels, barber shops and other places of public accommodation. Stiff penalties were provided for violation. As late as 1904 this civil rights law was familiar to a correspondent of the New York Times. But around the turn of the century it mysteriously disappeared from the compiled statutes of the District and it cannot be found in the present codes. Since there is no record of its repeal, some lawyers speculate that it may well be technically in full force and effect.[4]

Shortly after the report was released, activists led by Terrell formed the Coordinating Committee for the Enforcement of D.C. Anti-Discrimination Laws, and prepared to put this speculation to the test. The group did so by lobbying the D.C. Commissioners and picketing businesses that practiced segregation. But, it was the incident at Thompson’s restaurant, which gave the group the basis they needed to test the statutes in court.[5]

Terrell didn’t waste any time. When the Municipal Court building on 5th Street opened the following Monday, she, Jernigan, Brown and Scull paid a visit to Clark King, assistant corporation counsel for the District, and asked him to prosecute Thompson’s Restaurant for violating the Reconstruction era ordinances.

King and his boss, Vernon West, did not commit to anything immediately, claiming that the District Commissioners needed to weigh in before any decision for or against prosecutions was made. As King told The Evening Star, “If there is a valid law, it is our duty to uphold it. If there isn’t there will be no more argument.”[6]

Three weeks later, the Commissioners announced that the lost laws may still be enforceable and they would review the next restaurant discrimination case that they received.[7]

District of Columbia vs. John R. Thompson Co. went before Municipal Court judge Frank Myers on March 31. Judge Myers waited several weeks before releasing his opinion on July 10. In a blow to the Coordinating Committee, Myers found that the 1872 and 1873 “lost laws” had “been repealed by implication” and could no longer legally be enforced.[8] According to Myers, since the Territorial Government under which the laws were created was, itself, replaced by a new governmental system, the antidiscrimination ordinances no longer had any bearing on governing D.C. restaurants.

Furthermore, as Ben Bradlee wrote in the Washington Post, Myers admonished the Coordinating Committee saying that the solution to segregated restaurants in Washington “does not lie in an attempted revival and enforcement of parts of old municipal regulations which the court has found to have been superseded.”[9]

Mary Church Terrell couldn’t have been pleased with the Judge’s logic but she was undeterred. After another visit to Thompson’s with predictable results on July 27, the District appealed Myers’ decision. The lost laws’ winding journey to the Supreme Court had begun.

In May 1951, the Municipal Court of Appeals found in favor of city, disputing Judge Myers’ determination that the statutes in question had been “repealed by implication.” Then, in January 1953, the federal U.S. Court of Appeals ruled 5-4 in favor of Thompson. The U.S. Supreme Court agreed to take the case a few weeks later and heard arguments on April 27, 1953.

Terrell and her colleagues waited over a month for the high court’s decision, but it was worth the wait. On June 8, 1953 the Supreme Court ruled unanimously in favor of the city. The “lost laws” were enforceable and restaurants must open their doors to all, regardless of race.

The Washington Afro American celebrated the decision the next day with an oversized headline, “EAT ANYWHERE.”[10] For her part, Mary Church Terrell remarked,

“We will continue our efforts as long as necessary to see that this law is accepted by all in a fair and democratic fashion and that no restaurant will be permitted to violate or evade it. We will not permit these laws to become ‘lost’ again.”[11]

For more on Mary Church Terrell’s activism pickup a copy of Joan Quigley’s book Just Another Southern Town: Mary Church Terrell and the Struggle for Racial Justice in the Nation’s Capital (Oxford University Press, 2016). For more context on the District vs. Thompson case’s role in the struggle for civil rights and the fight for home rule in D.C., see Wendell Pritchett’s 2005 article in the Georgetown Law Review.