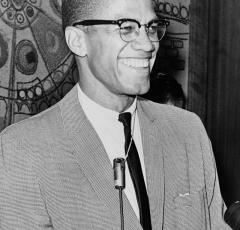 In the early 1960s, Malcolm X traveled widely preaching black separatism on behalf of the Nation of Islam and – after splitting from the group in 1964 – promoting a more moderate vision for American race relations. So, it's no surprise that he came to the nation's capital on a number of occasions.

On the 50th anniversary of his death, we look back on two rather unusual connections Malcolm made in Washington.

In 1964, D.C. was the site of the only known in-person meeting between Malcolm and Dr. Martin Luther King, Jr., which was significant considering the two leaders' very public differences on approaches to the civil rights movement. Malcolm once called King "Rev. Dr. Chicken-wing" in a not-so-subtle critique of non-violent civil disobedience.

The two staged a made-for-the-cameras meeting in the U.S. Capitol. But, as strange as the photo-op with King seemed at the time, Malcolm made headlines with an even more unlikely connection in Washington a few years earlier. 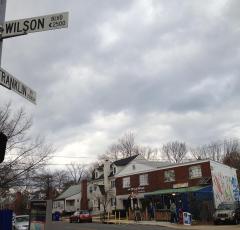 Today the small brick building at 2507 N. Franklin Rd. in Arlington is the home of the Javashack, a hip coffee shop with specialty brews, free wifi and – as one patron termed it – “left-leaning politics.”

This is quite a departure from the building’s previous life. From 1968-1984, this duplex was the national headquarters of the American Nazi Party. A swastika hung over the doorway (visible from busy Wilson Blvd half a block away) and khaki-clad “storm troopers” occupied the space, developing anti-Jewish propaganda, proclaiming White Power and periodically clashing with neighbors.