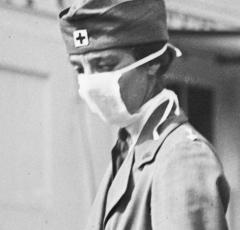 It was the start of October and the dog days of summer in the nation’s capital had officially come to an end. The crisp autumn air, a relief to most Washingtonians in years past, was an ominous foreshadowing of the days and weeks to come. There would be no more open windows in homes, streetcars, or workplaces for the foreseeable future. With an invisible killer hanging in the air, Washington would soon find itself in crisis — and transplanted war workers bore the brunt of it.

Stubby, the World War I war dog looms large in animal and American military history. By no means a professionally trained canine, Stubby was smuggled from Connecticut to France where he first served in a morale position. He took on a greater role as he got used to warfare, aiding the troops any way he could. When he came back to America, he became a celebrity, especially in Washington, DC.

A century ago, Arlington, Virginia was home to one of the most powerful radio stations in history, which helped to usher in an era of wireless communications worldwide.

On January 7, 1993, an alarming headline greeted readers of The Washington Post: “25 HOUSES EVACUATED AS WWI SHELLS EXAMINED.” The previous day, a backhoe operator digging a trench in the Spring Valley neighborhood of Northwest Washington had uncovered a suspicious object. The construction company called the D.C. Fire Department… who called the police… who called the bomb squad. Within hours, 25 homes in the upscale neighborhood had been temporarily evacuated as munitions crews from the Army Technical Escort Unit at Aberdeen Proving Grounds investigated. Their verdict? The objects were unexploded mortar and artillery shells – and there might be more in the area.

In 1910 Maryland Democrats planned to bar all African Americans from voting, forever. But Black men and women were ready to fight for their place in the state.

As the United States entered World War I, women became a vital part of the war effort. The Navy created a single unit of African-American Yeomanettes, which was assigned to Washington D.C.'s Navy Yard, and quickly made an impression.

The Butt-Millet Memorial Fountain honors Major Archibald Butt and artist Francis Millet, two men who died together on the ship of dreams. Close friends and housemates in Washington, D.C., these men would be mourned by most of Washington, including President William Howard Taft.

On March 3, 1913, one day before the inauguration of President Woodrow Wilson, 5,000 women marched on Pennsylvania Avenue to demand women's suffrage. Though their parade was met with violence from the crowd, the suffragettes kept marching toward the vote.

On June 8, 1918, Washingtonians looked to the sky hoping to see… well… something. But, many weren’t quite sure exactly what. As the Evening Star noted:

“There was a great craning of necks on the streets. Many a citizen who had read about the eclipse and forgotten about it, wanted to know where the aeroplane was…. One woman called up The Star and wanted to know whether the Marine Band ‘is playing on the eclipse.’ A reporter carefully explained that the Marine Band sometimes played on the Ellipse.”

For scientists at the U.S. Naval Observatory on Massachusetts Avenue, however, there was no confusion. The day marked an extraordinary astronomical event -- a transcontinental total eclipse -- and they pulled out all the stops to document it.